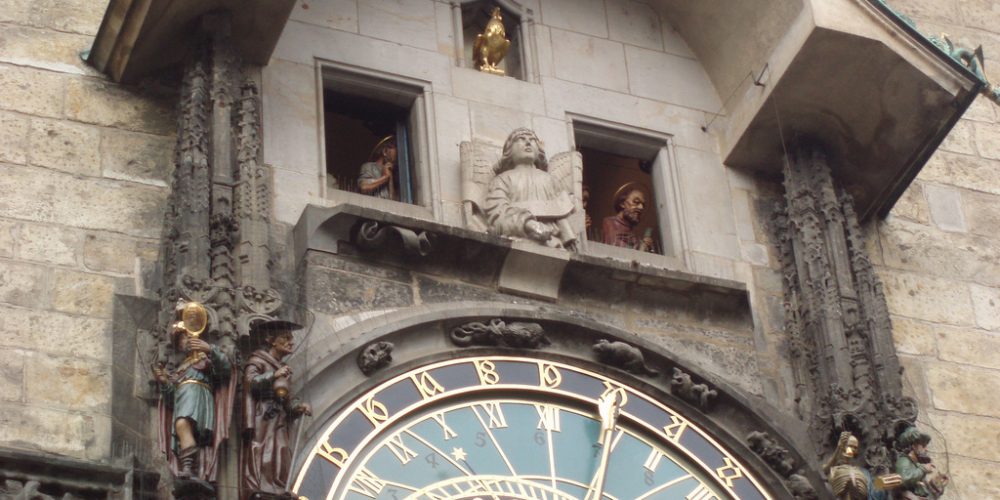 Every hour, hundreds of tourists from all over the world with cameras at the ready gather in front of the Old Town Hall to enjoy a fascinating mechanical performance which in the Middle Ages was considered one of the wonders of the world. The Prague Astronomical Clock, which for 600 years has been one of the greatest treasures of the city, still amazes people with its procession of Apostles, moving statues and visualization of time like no other instrument in the world.

Legends about the origins of the Prague Astronomical Clock are many. The most famous one, however, is that it was built by Master Hanuš in 1410. The city councillors at that time were so delighted with the clock that they later began to fear that Master Hanuš would build one like it for another European city. Therefore one dark night they had him blinded, and thus the wondrous clock remained only in Prague. Whether or not this legend is true, what is certain is that at the top of every hour figures on the sides of the clock become animated and two windows open up to reveal 12 apostles greeting the city. On the sides of the clock you’ll see a skeleton ringing a bell, a Turk shaking his head, a miser with a purse full of money, and Vanity looking in a mirror. The whole performance ends with the crowing of a golden rooster and the ringing of the huge bell at the top of the tower. It is also said that at the first cock-crow in the morning the ghosts and devils flee from Prague.

A place where history shines

It is possible to tell from the clock dial what day it is and its position in the week, month and year. The Astronomical Clock also tracks Central European, Babylonian and Sidereal time – the last one in the world to do so! It is also possible to see the position of celestial bodies on it. On the calendar with replicas of paintings by Josef Mánes you can see which sign of the zodiac currently reigns. During the summer season, be sure not to miss the video mapping projection, during which the most important events in Czech history come alive on the clock. It is an unforgettable spectacle!