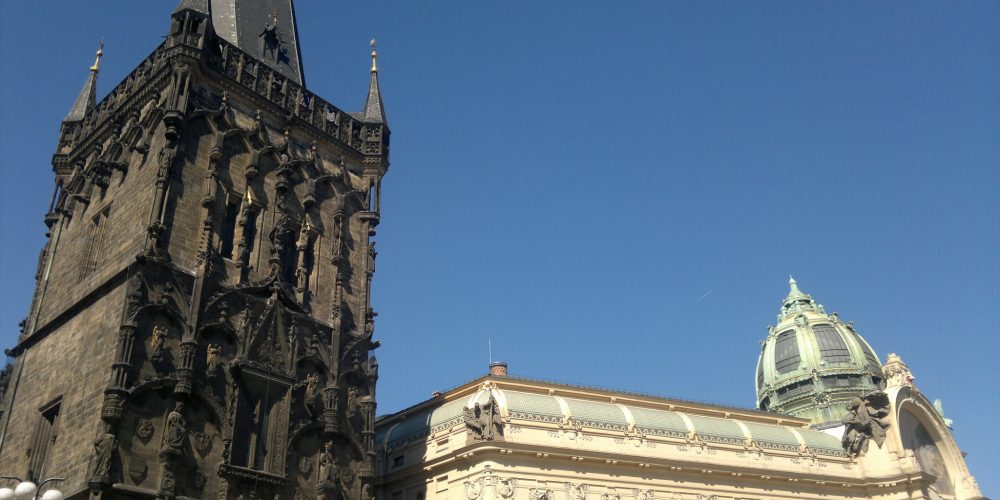 The Gothic Powder Tower in the Old Town used to be a gate to Prague in the middle ages. It was built in a ditch around the town´s ramparts, about 9 metres below the present ground. The future kings of Bohemia used to enter the town through this gate when they were on their coronation parade. This parade went on the traditional Royal Way to the Prague Castle, where the coronation took place. Together with the Old Town Bridge Tower, the Powder Tower is the only existing part of the former Prague Old Town fortification.

When the Royal family moved from the Royal Court in the Old Town back to the Prague Castle in 1488, the Powder Tower was left unfinished. Some building work was done in 1592, when the new spiral staircase was built.

The Powder Tower bears its name because of the gunpowder, that used to be stored there since the 18th century. The tower was damaged by shooting of the Prussian army in 1757. Many decorative sculptures were damaged and later removed.

The Powder Tower was restored and completed in the pseudo-Gothic style between 1875 and 1886 by the architect Josef Mocker.

Statues on the Powder Tower
There are still many decorations on the tower. The first floor is adorned with statues of Bohemian kings: you can see statues of George of Podebrady and Vladislav II. from the Celetna street and Premysl Otakar II. and Charles IV. from the other side. They are surrounded by symbols of countries, over which they reigned. In the level of the second floor, there are statues of Bohemian patrons and saints.