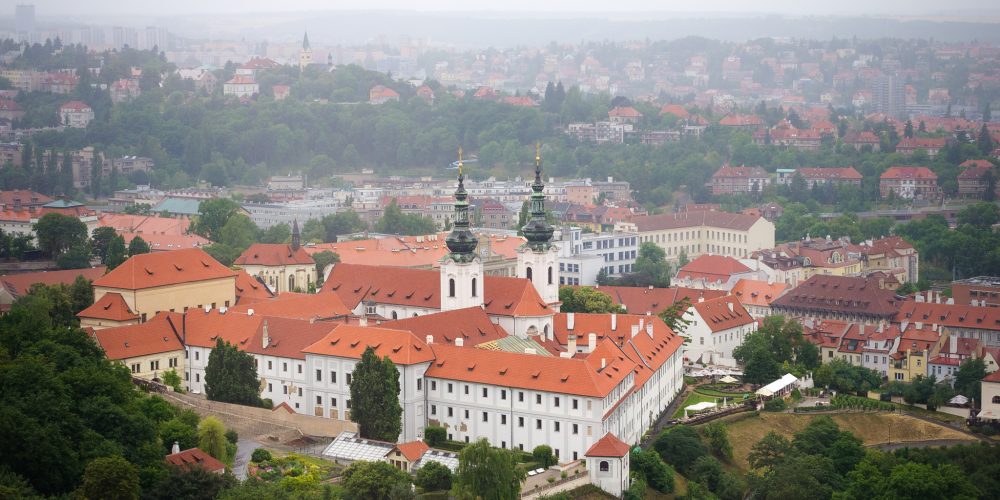 The Strahov Monastery (Strahovský klášter in Czech) also known as the Royal Canonry of Premonstratensians at Strahov, located on the western edge of Hradčany is one of the oldest monasteries of the Premonstratensian Order in the World.

The Strahov Monastery (Strahovsky Klaster) started its long itinerary through history with establishment of the Premonstratensians, a religious order of canons founded in 1120 by St Norbert as an independent part of the Catholic church. By the year 1182 a Romanesque stone monastery was built on the place of an older foundation of Prince Vladislav II (from 1140). It’s peace was disturbed by a fire in 1258, when the church was destructed almost totally. A reconstruction in the Gothic style followed, but that was not to last either, as Baroque retouches were added during the beginning of the 18th century. In the meanwhile the abbey was plundered first by the Hussites and during the Thirty Years’ War by a regiment of the Swedish army. The last but not least hit that the abbey had to take was the bombardment of the church’s premises by the French, in 1742. After the Communist regime ended, the abbey was returned to the Premonstratensians in 1989. The Strahov Monastery it is not only an active place of pilgrimage but also a valuable museum and a famous library, still holding an unbelievable number of rare volumes.

The monastic Basilica of the Assumption is an originally Romanesque building, rebuilt in 1601-1605 by Abbot Lohelius. It is beautifully decorated by numerous frescoes; the pictures on the arched ceiling symbolize some of the invocations contained in the Litany of the Blessed Virgin, and on the side walls are scenes from the life of St. Norbert. These beautiful frescoes are the work of Prague artist Georg Wilhelm Neuherz (d. 1743). The Chapel of St. Norbert has the saint’s relics in a casket of copper and bronze, richly gilded. The organ is the work of the Strahov monk Lohel Oehlschlägel (d. 1774).

The Church of Saint Roch is a Gothic-Renaissance building, built in 1603 by Rudolf II, Holy Roman Emperor, in gratitude for the end of plague in Prague in 1599. It was rebuilt in 1747 and again in 1882.

The monastic library contains over 110,000 volumes, of which 1200 are incunabula. Of these there are about sixty unique volumes. Of the many rare manuscripts the most precious is the “Evangelistarium” of the sixth century, written in uncial letters and still well-preserved. Among others may be mentioned: “Gerlaci Chronicon“, Codex Strahoviensis from 1220; the “Pontificale” of Bishop Albert of Sternberg, made in 1376; the “Missale” of the Premonstratensian Abbey of Louky of 1480; the miniature manuscript of the Bible of the thirteenth century, written by a nun of the cloister of Doksany; “Sich’s Gradual” of 1610, weighing fifty pounds. The art gallery has the original painting of Dürer’s “Blessed Virgin of the Rosary“, of 1506, with the master’s own portrait; and paintings by Correggio, Van Dyck, Holbein, van Aachen, Reiner, Škréta, Brandl, etc.